Offenders in Norfolk could be subject to drug testing in custody in a bid to identify users and reduce crime.

A family's anguish at moving their vulnerable mother three times in four months has laid bare the grim reality of care home closures.

A community has paid tribute to a 25-year-old father who was found dead in an overturned car on the A47.

From fish and chips with a difference to a farm cafe, here are all the restaurants in Norfolk that feature in The Michelin Guide 2020.

A Norfolk zoo ran a drive to get people to donate old Christmas trees once again this year - an idea that appears to have gone down rather well with its residents.

Police are warning motorists to be alert after a van crashed into a telephone pole in Shropham.

Get the scrapers out - severe frost and freezing fog across Norfolk

Windscreen smashed and two arrested in A47 'road rage' altercation

Drivers to be targeted in two-week speed campaign

Gritters called out to prepare roads for more icy weather

Time is running out for Norwich City fans to get their hands on the final stickers to complete their albums - with the collectables set to come off the shelves in a matter of days.

Nearly 700 runners shrugged off the excesses of the festive season to take part in the Wymondham 10K on New Year's Day.

Big music names like The Killers and Westlife performing in Norwich could be just the beginning of Carrow Road becoming more than a football stadium, it has been revealed.

We are giving away four free VIP upgrades to see two 90s dance legends this weekend at OPEN.

BGT winner Colin Thackery has added a matinee performance to his Norwich concert on January 31 after tickets sold out within a matter of hours.

Chelsea Pensioner Colin, 89, captured the hearts of a nation when he won Britain's Got Talent last year, causing judge Simon Cowell to punch the air with joy. He dedicated his audition to wife of 66 years Joan, who he lived in Norwich with for 40 years and who died in 2016 after being diagnosed with cancer for a second time.

When the EDP announced that Colin would be performing at The Assembly House on Friday January 31, tickets sold like hot cakes: so the veteran performer has agreed to appear on the bill twice in one day.

An Audience with Colin Thackery, in association with Rotary Club of Norwich, has been organised by Annette Jude, who will accompany Colin on the piano, Susie Turner, who will sing with him and Heather Millan whose students from her School of Dance and Performing Arts will take part.

Tickets for the evening performance have now sold out, but an additional concert has been added at 3pm. All proceeds will go to the Norfolk and Norwich Hospital's Boudicca Breast Cancer Appeal.

In addition to singing, Colin will also share stories about his life and his recent journey to stardom.

"We are so excited to have Colin perform twice!" said Annette, who added that The Assembly House, the Norfolk and Norwich University Hospital's Inspirational Fundraiser of the Year, had given offered its Music Room for free in order to help raise funds for the unit which treated Colin's wife.

"Tickets went so quickly and Colin has been kind enough to agree to a second performance."

* An Audience with Colin Thackery is at The Assembly House in Norwich on January 31 at 7.30pm, tickets cost £20, call Heather on 01603 763860. Colin Thackery's Norwich charity concert sold out in hours - so he's putting on another concert on the same date in the same venue a few hours earlier! Tickets now on sale.

A sing-along screening of hit sequel Mamma Mia: Here We Go Again is taking place later this year and it will make you dance, jive and have the time of your life.

Star of Netflix's Making a Murderer coming to Norwich

Fans of hit Netflix crime documentary Making a Murderer will gain a unique insight into a case that captured the world's attention at a Q&A in Norwich with one of its stars.

From the return of Lou Lou's Vintage Fair to a star of The X Factor, there is plenty to keep you entertained this weekend in Norfolk.

Click here to view
the Great Days Out
supplement

Drivers to be targeted in two-week speed campaign 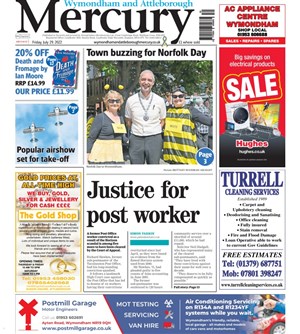